skip to main | skip to sidebar

Controversy about women's clothing sizes--and women's body sizes--is well known to any woman, whether cute young fashionista or mall-shopping grandmother. Part of the shopping experience is the absolute necessity of trying on jeans and trousers before purchase.

The occasional knit top might be bought on the fly, but a garment that has to fit the hips and tummy, plus the legs (in both circumference and length), requires a fitting room with a three-way mirror, plus an armload of possibilities for trying on, probably in several different sizes, because sizing is ephemeral.

The famous New York chain store which anchors our local mall has set up its in-house brands so that I fit into a size 8. Very flattering, except that similar garments in fashion brands not made under the store's label, I fit into a 10. And then there's Levi Strauss, the blue jeans I have worn throughout my life, starting way back when they were still made in San Francisco, and I was living there.

My first pair of grown-up Levi's, rigid denim with a daisy label inside proclaiming "for girls" was purchased circa 1970, and worn until motherhood, and waistline expansion, sent them to the Goodwill. I've gotten more than a few pairs since then, and I've always known approximately where I fit on the size scale through the years.

There has been a lot of talk about size 0 models over the last few years, and folks like me have wondered how anyone can really be size 0.

According to my clothes-buying experience, the new size 8 is the old size 14 of 30 years ago, so this paradigm follows, new sizing on the left, old sizing on the right:

I suspect that Levi Strauss may have been one of the last holdouts against "vanity sizing" and now even they have given up.

We aren't really getting thinner, ladies. Our clothes are getting bigger!
Posted by Blue Sky at 7:44 AM 1 comment:

First, let me admit that I'm almost a senior citizen--and I've been an observer of the U.S. economy for 30 years or so.

Back when we were young, in the mid-1970's, my husband and I moved to Texas with our baby daughter after he finished his military service. We came here because of the unbeatable combination of a job offer and a city with affordable housing and several good universities. Our plan was to find an affordable house, pay on it for a few years while my husband finished his degree, and then move on. We managed all of it except the moving on part, and we still live in the small house we bought then.

Why didn't we ever "move up" as we had planned? Simply because the economic situation in the United States changed. Our original mortgage was governed by usury laws in the state of Texas, capping a "floating" interest rate at 10%. Two years later, that law and all similar ones across the country, was rescinded by the U.S. government under Ronald Reagan. New mortgages were at about 18% interest, or more, when we looked at "move up" housing.

And of course, there were the Realtors to contend with. Before we bought our first home, we planned our finances carefully, and then we toured the city with two different Realtors, from two different agencies.

Then my husband, a dedicated jogger, found our current neighborhood a few miles from our apartment, and we checked out all the "For Sale" signs and found a house that fit both our chosen debt limits and our other requirements.

Both of the Realtors who had shown us the houses beyond our means called a few weeks later, and we told them that we had found our home, within our price range, thank you very much.

Based on that admittedly limited experience, I would say that pushing a home-buying client to accept more debt than planned is probably a long-standing standard practice in the Real Estate profession. A practice that got out of hand in recent years, but a standard practice nevertheless.

Another point: back when we bought our home, we bought it to live in. We wanted a roof over our heads and a safe place for our daughter to play outside. Our apartment rent was a major outlay each month, and due to rise on a regular basis every six months; replacing it with house payments of approximately the same size seemed like a good choice, since we expected to stay in the area for awhile.

Somehow, in recent years, the home became transmuted from a shelter into a piggy bank. The idea of staying in a house to raise a family shifted into selling a house at a profit. A big, fancy house that was not really affordable was OK, because you weren't really planning to stay there, only to sell it at a higher price to the next buyer, get a pile of money, and get an even bigger unaffordable house, to sell on to another buyer.

All of which neatly fit into the above-mentioned standard practice of encouraging a buyer to accept a bigger mortgage than he or she really planned on.

Now we've reached the point where housing prices have topped out, and are going downhill, because (as we might have expected), at a certain point the upward spiral has to stop. In the end, a home is shelter. And even in good economic times, there is a limit to what folks can afford to pay for shelter.

There has been a lot of moaning about how the American public has been too greedy and too selfish to think and plan ahead, and has taken on more debt than was wise. But it seems to me that the whole home-buying environment has been polluted for some time.
Posted by Blue Sky at 8:06 AM 1 comment: 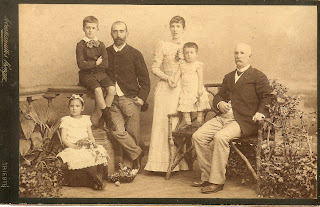 From left to right, I believe these folks are:

Lisette (seated, with flowers in her lap), Louis (sitting on the decorative railing behing her), Auguste (standing next to Louis), Laure, baby Victor (toddler in a dress), and Laure's father, Victor Chartrey.

Auguste would be the uncle of Albert Margutti, brother of Henri, son of Alexandre. Auguste died in Puenta Arenas, Chile, in 1917.
Posted by Blue Sky at 2:42 PM No comments:

Our beloved cat Billy Bob was put to sleep this afternoon. He had been slowly failing for several months (we see in retrospect), and reached the critical point on Saturday (two days ago). We took him into the Burnet Road Animal Hospital (where he has many fans), but the treatment he was given did not improve his condition. We had the choice of having him die at home, slowly and inevitably, over the next 48 hours, or ending his suffering quickly. We have chosen the latter.

We will miss him; he was an intelligent, gregarious feline who loved people, scorned dogs, and had his own unique way of doing things. If there is a life beyond this, we know that he is reunited with Richard Beck, who befriended and named Billy Bob in his kittenhood. Mr. Beck was in his 90's when he passed away (just a week before his wife's death), and Billy Bob came to us shortly afterwards.

This cool little dude-cat received pats from many of the neighborhood joggers every evening, and was known to make daily rounds of several back gardens besides our own. We were privileged, however, to be the family that he chose as his own.

Peace to his spirit, wherever it may be.
Posted by Blue Sky at 11:22 AM No comments:

We returned from our visit to Germany a few days ago, and I must say that our daughter and new son-in-law, plus all his assorted family members, did their very best to make us feel welcome. A long Sunday afternoon spent driving through the beautiful country of the Weinstrasse, a couple of dinners in the new apartment, plus lots of walking and exploring on our own, kept us busy.

Several of the other family members who made the trip were traveling outside the U.S. for the first time, and I hope that they enjoyed themselves, and have recovered from the "culture shock" of not having ice cubes automatically served in their soft drinks--even on a hot day! 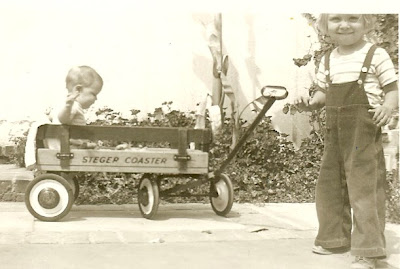 This baby grew up to be beautiful, intelligent, fun-loving and strong. Her big sister is just as proud of her now as she was then, sixty years ago.

Today I wish that she may always be happy in her mountaintop home, and that her own children and grandchildren may bring her the joy that she has always given to others.

A special visit--and a special dress

This week we have been enjoying a lovely visit from a designer friend of Larissa's, who has turned our family room into an atelier, complete with busy sewing machine, lowly assistants (Larissa and her mom) and yards of silk organza. Today the bridal gown is taking its final shape. This is a big thank-you to this wonderful person, who wishes not to be named, not only for her expertise, but for her friendly presence all week.

In her current life, our friend designs little boys' clothing, which does not involve any use of delicate silk or dainty pleating, so a bridal dress, she says, is a welcome change of pace.

Watch this blog for photos of the final creation, making its appearance in August!
Posted by Blue Sky at 11:12 AM No comments:

Blue Sky
When I was a child, the blue sky above my grandparents' house, at the edge of the southern California desert east of Los Angeles, was my favorite color in the whole world: a bright turquoise, so brilliant it almost hurt to look at it. Every time I think of writing, of putting my thoughts on paper or in electronic format, I remember that sky, and the house where I saw it, where I first began to become a writer.